PRESIDENT QUEZON’S OWN GUERRILLAS
STO. TOMAS, BATANGAS
Sto. Tomas, Batangas
1. Request that the attached supplementary roster of the PQOG (President Quezon’s Own Guerrillas), Sto. Tomas Unit, be recognized.
2. Explanation: a. On 1 March 45, the PQOG, Sto. Tomas Unit, was attached to the 11th Airborne Division and took active part in the operations from Calamba, Laguna to Sto. Tomas, Batangas, from 1 March 45 to 31 March 45. (Please refer to the history of this unit submitted with main roster sometime 4 March 45 by Lt. Col. Lorenzo N. Talatala, then CO of this Unit which was recognized on 1 March 45.)
b. On 22 March 45, the 1st Cavalry Division relieved the 11th Airborne at Mabanot Hill, Sto. Tomas, Batangas. On that day, the 11th Airborne left for Tagaytay, Cavite. But the CO of the PQOG Unit requested that this unit be left until the liberation of Sto. Tomas, Batangas. Request was granted.
c. Sto. Tomas was liberated on 25 March 45. Following liberation, the main body left for Lipa, Batangas. Upon orders of General Swing to meet the 11th Airborne which proceeded there from Tagaytay. However, in view of the presence of many more Japs in the hills of Sta. Clara, Sto. Tomas, and environs, which were not liberated, General King of the 1st Cavalry requested some men of the PQOG to guide them in their operations against the enemy in those areas. Eleven men under Capt. Iluminado Landicho were detailed and attached to the 1st Cavalry in compliance with request. The attached roster covering the names of seven (7) of [the] men was inadvertently omitted from the main list.
d. Those men showed active action with the 1st Cavalry at Mt. Ulila, Sta. Clara, Suloc, all in the municipality of Sto. Tomas, Alaminos (Laguna) and Tiaong, Candelaria, Pagbilao, and Guinoagan all in the province of Tayabas. At Mt. Ulila, Loreto Landicho was killed in action, Capt. Iluminado Landicho was slightly wounded in action and needed no hospitalization, while another like Rodrigo Jaurigue was wounded and disabled in action. 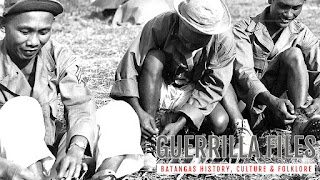 e. Only four (4) of these eleven (11) men appear in the main roster of this Unit due most probably to [a] clerical error in spite of the fact that all of them were with this unit until their detail to the 1st Cavalry. As a matter of fact, Captain Landicho had been leading patrols that were sent from time to time to the town of Sto. Tomas while we were in advanced [operations] with the 511th Parachute Infantry, prior to the liberation of the same town on 25 March 45 and even retrieved the corpse of a GI named Perez in the midst of hazards and enemy fire near the market of Sto. Tomas while he and his men were on patrol.

f. On or about 3 May 45, the undersigned, who relieved Lt. Col. Talatala as CO of this unit, wrote a letter to Col. King of the 8th Cavalry Squadron, 1st Cavalry Division, to which unit the eleven (11) men were attached, thru the 511th Parachute Infantry, 11th Airborne Division inquiring about these eleven (11) men and their records, and requesting that their names be submitted to the Philippine Army and AFPAC. But no reply was received. At present, the undersigned does not even know where the 8th Cavalry Squadron is.
3. In view of the foregoing, it is strongly recommended that the names of the seven (7) men who actually and heroically took part in the operations in the areas mentioned above be made a part of the main roster of the PQOG, Sto. Tomas Unit which was duly recognized on 1 March ‘45, so that they or the survivors can claim the benefit due them. It is but just and proper that this correction or inadvertent clerical error which may be due do the inexperience of the clerk who made the report of the PQOG Unit, be approved.
FOR AND IN THE ABSENCE OF THE CO.
(SGD) PABLO T. MENDOZA
Maj. Inf. 0-42096
Acting Co.