The Pandita Unit was a guerrilla organization organized in the town of Bauan, Batangas. It was supposedly affiliated with the 6th Military District under Col. Macario Peralta which was based in the island of Panay in the Visayas. Also affiliated with this district is the Lobo Unit, the documents of which are also posted in this web site. In this particular document1 is a transcription of a short history of the Pandita Unit as it was submitted to the United States Army in the unit’s application for official recognition. 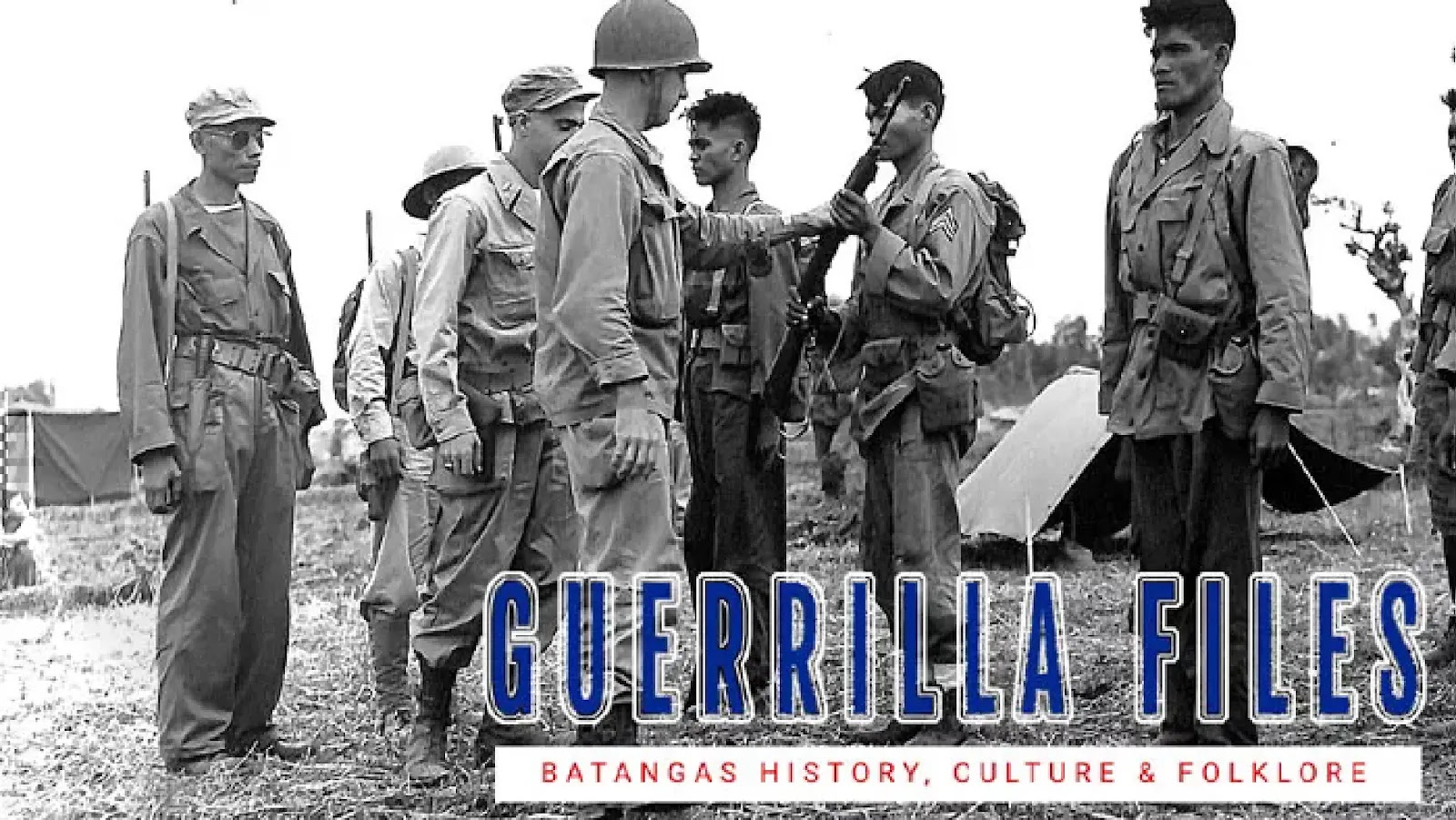 HEADQUARTERS, 1st Regt. Guerrilla
Pandita Area
In the Field
29 December ’45
It was in December 1943 when the Pandita Area began to function as a guerrilla organization with headquarters at Bauan, Batangas. Several days thereafter, in order to carry out its mission as an effective unit with the task of counteracting the activities of the Japanese and their allies, the induction of officers was made so as to have sufficient men to handle the job of the different units within the organization. Vicente Conti was inducted into the service as First Lieutenant S-1, Adjutant and acting as the Executive Officer and the one in charge of all the papers and records of our Unit. The selection of the headquarters followed and the house of Mr. Cenon Arrieta was chosen as the best that could be had during that time. Of course, it was only temporary due to the fact that we could not always be in one designated place in order to escape the notice of the enemy. The first two months of the organization were devoted mainly to inducting into the service officers and men. Having inducted the officers and men, we were ready and capable to discharge the duties of the various units within the organization such as propaganda, espionage, sabotage, etc.
In the middle part of the month of January 1944, or on January 15, 1944, the then-Captain Flores contacted the Manila Headquarters and inducted to duty several officers and enlisted men in the cities of Manila and Pasay, Rizal. He also selected the house of Mr. V. R. Arrieta, located at 215 M. Earnshaw, Int. 19, Sampaloc, as branch headquarters in Manila.
Reports were made at the Manila Headquarters and sent to Mindoro and Panay. The usual procedure was to send missions composed of intelligence operatives to the Manila Headquarters, after which intelligence reports, maps, and diagrams of military installations were prepared. These documents were then forwarded to headquarters at Panay for proper disposition. Reports continued to be sent to Panay for the next few months until May 1944. Due to the distance from this headquarters to Panay, however, it was felt

that a more efficient and faster way was for reports to be forwarded to the Mindoro Headquarters, and then relayed to Panay where they were sifted and classified. So, in May 1944, we started forwarding our intelligence reports to Lt. Col. E. L. Jurado of the Mindoro Headquarters. Throughout all this time, however, we had been trying to improve our organization and operation so we could function like a well-oiled machine, while keeping our activities as much as possible from the notice of the enemy. We were given valuable suggestions in this regard by both headquarters at Panay and Mindoro.

In order to coordinate our reports, we had twenty-four intelligence operatives distributed throughout Luzon. Most of them, however, were assigned to cover Manila. Their duties, mainly, were to contact resistance groups in the areas they were covering, and from there go back to our headquarters where the reports were made in final form. These activities continued for months throughout the crucial days before the American landings, until our organization joined BATTERY “D” 382nd AAA AW BATTALION on March 8, 1945. In February 1945, we were given verbal orders through our Executive Officer, from Lt. Commander Nicholson2, CO, SWPA, with headquarters in Mindoro, to contact the landing forces of the USAFFE in Nasugbu, Batangas. On February 11, 1945, we sent a detachment to make contact. The following day, we were able to contact Lt. Rogers, right-hand man of Lt. Col. Farren, commander in charge of guerrilla units. He advised us to lie low and wait for them there, and since they were short of arms, they could not supply us the necessary arms for the use of my unit. We then went back to our headquarters the following day, arriving at about eleven o’clock p.m. on February 19, 1945.
Upon arrival at my headquarters, my intelligence operatives reported that the situation in Bauan, Batangas seemed to be getting critical, what with the American landings in Mindoro, the Japanese were getting jittery and suspicious of all civilians. So, I ordered my men to commandeer every available boat in the vicinity. We were able to get about fifteen boats, composed of fourteen big bancas used for fishing, one sailboat named “Pandita Area.” We started telling the civilians to pack up as they were going to be evacuated to Mindoro which had already been liberated by the Americans. The civilians, realizing the seriousness of the situation, were quick to respond, and so we started loading them on the boats that would take them to Mindoro. From February 20 to March 7, 1945, we were able to evacuate approximately 15,000 people, every boat making an average of two trips a day with a minimum load of 80 to 100 people on each boat.

On February 28, 1945, a group of Japanese soldiers believed to have come from Taal arrived in Batangas and stayed at the school building. They rounded up all the civilians who passed near the school building and herded them into the parochial church. At about nine o’clock in the morning, they rounded up the people by announcing that there was going to be a meeting in the church and that all the people would assemble therein. The other Japs, meanwhile, entered the private dwellings and began to ransack and loot the houses. When the church was filled to overflowing, those who could not be accommodated inside the church were herded into the cellar of a house situated near the church. The town mayor was urging the people to assemble, assuring them that no harm would befall them. One of my intelligence operatives, Lt. Gertrudo Cuevas, who was among those herded but was able to escape later, saw a box-like contraption being connected inside the cellar. He quickly guessed that the contraption was going to be used to blow up the cellar and all the people that were inside. All the shutters and doors were heavily barred by this time, and Japanese soldiers with gleaming bayonets at the ends of their rifles were guarding all avenues of escape. Soon, we heard three very loud explosions, one after the other. Most of the people inside were killed immediately, and those that were able to escape through the gaping walls were mowed down by machine gun fire and hand grenades. Only very few survived to tell of the ghastly horror. Immediately after, the Japs began applying the torch to the houses nearby, which quickly spread around and over the town. Every male civilian that started to run away from the blazing inferno was shot down. There were those who miraculously escaped destruction in the dugouts when they were blasted away by hand grenades and pretended to have been killed. These people lived to tell of the terrible experience they went through for one whole day and night. After the Japanese soldiers left, I dispatched members of my medical company to render first aid to those that needed it, and I can say that there were many of them. All in all, it is estimated that about 500 people met death in this atrocity.
Three days after the massacre, the 158th Regimental Combat Team arrived in Bauan asking for information regarding the enemy near the area. My Executive Officer, Lt. Gregorio Fider, accompanied them as guide. Our organization was temporarily attached to the 158th R. C. T. for about three weeks. At the end of that time, they left, to be replaced by Battery “D” AAA AW Bn. They arrived at Barrio Aplaya, Bauan, Batangas. We were also temporarily attached to the above unit in combat operations and mopping up the scattered enemy units in the hills of Batangas. The battery lent us arms, of which we were badly in need, for the operations, and my unit was accompanied by Lt. Henfield. On March 11, with a good number of arms and ammunition, one of my combat units, under Lt.

Francisco Gran, composed of about 450 officers and men, fought an engagement with a bigger number of Japanese soldiers in Barrio Maynaga, Mabini. We fought for three days, after which all the Japanese were either killed or wounded. At the end of three days, we counted approximately seven hundred Japanese dead. On March 18, Sgt. Egmidio Guevarra, with eight men, was sent to Duruñgao to verify the presence of some Japanese soldiers in that place. Upon learning that the report was true, I dispatched Lt. Gran with 150 men to wipe out the Japs. We fought them right on the beach of Duruñgao, Mabini. They had Q-boats with them and had dug in. In this engagement, 15 Japanese were killed and the rest were able to escape to the mountains. We captured the Q-boats, and upon order of the Americans, we burned them. On March 27, we fought with a firmly-entrenched enemy in Barrio Bolo, but we were able to kill only one Japanese soldier and captured a Japanese saber. On April 5, Lt. Gregorio Fider, with 250 men, accompanied by Lt. Henfield of Batter “D” 382ndAAA AW BN, fought an engagement on a narrow pass going to Lipa. The engagement lasted five days, at the end of which time, Lt. Henfield and his men were ordered by their CO, CAPT. PRESLOCK, to go ahead to Lipa and mop up the remnants of the enemy. From Lipa, the Americans proceeded to Lucena with some of my officers and men. My officers returned to headquarters after a short stay in Lucena, while the boys joined up with the battery, and until now have not yet returned.

On April 17, 1945, I went to Manila to submit the necessary papers to the Department of the Interior in connection with the recognition of our unit. The papers were later forwarded to the Department of National defense on September 14, 1945, and since no answer has been forthcoming, I went back to Manila again to work for it. I submitted my papers also on September to the U.S. ARMY TRAINING GROUP and we were contacted by Major B.W. Huebsch, accompanied by Sgt. Victorio October 5, 1945. Due investigation of our activities was made by Major Huebsch at our Manila Headquarters, after which he proceeded to Bauan, Batangas to make further investigation. Major Huebsch suggested that I make efforts to get the papers relative to our temporary connections with Battery B, after which he would recommend the recognition of our unit. I was able to get the papers and submitted the same to him, and until now I have not received any notification or reply as to the action taken.
Respectfully submitted
[Sgd.] DENNY P. FLORES
Col. Inf.-Guer.
Commanding Officer, Pandita Area
(DI D COMB. FLA 6" MD)

Notes and references:
1 “Pandita Area, Free Luzon Intelligence Echelon, 6th MD, [Folder 4],” online at the United States National Archives.
2 “Commander Nicholson” was the alias of US Navy Commander George Rowe, sent to Mindoro by SWPA in a mission called “Mission ISRM (I Shall Return MacArthur), essentially to pave the way for the invasion of the Philippines. He was not the commander of the SWPA.
Next Post Previous Post
Bauan,Guerrillas in Batangas,World War II