This article, as dictated by the scope of this web site, is limited to statistics relevant to Batangas. However, the numbers will likely be reflective of population growth elsewhere in the country 114 years after the fact. The growth rates, needless to say, when compared to present day statistics are staggering.

In the context of Batangas, the 1903 census was likely affected by several significant events that preceded it: the Philippine Revolution and the Fil-American War; Gen. J. Franklin Bell’s scorched earth policy in Batangas and the introduction of re-concentration camps; and the outbreaks of diseases such as cholera, smallpox, dysentery and others that were probably abetted because the cramped conditions of these camps2.

All readers please note that the town of Santa Teresita is not included in this article. In 1903, when the census was undertaken, the town did not as yet exist. It only came to be in 1961 with land formerly belonging to the towns of Taal, San Luis and San Nicolas.

Balayan’s population in 1903 was 8,493. Curiously, the 1903 Census presented separated statistics for Calatagan, which was part of Balayan until 1912. At any rate, compared to Balayan’s population of 90,699 as per the 2015 Philippine Census, the percentage increase is an amazing 967.93%.

As mentioned, Calatagan in 1903 was still part of Balayan but for some reason, its population statistics were provided separately. The number was 2,654. Compared to the town’s 2015 population of 56,449, the percentage increase is an amazing 2,026.94%. 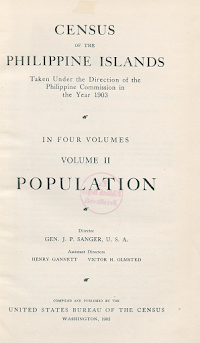 If you wish to make a donation to Batangas History, click on the Donate button below:
Leave a comment: