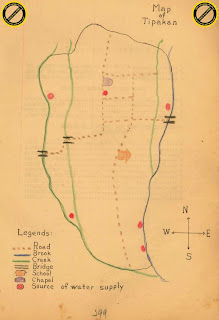 
THE PRESENT OFFICIAL NAME OF THE BARRIO
The present official name of the barrio is Tipakan. During the Spanish time, it was called Santa Leonida. This name was derived from a saint named Santa Leonida. Several years passed and the name Santa Leonida was changed to Tangob. The present barrio of Tangob, which is north of Tipakan, was once a part of the barrio. Later on, it was divided into two barrios. The northern side was called “Tangob na Bata” and the southern side “Tangob na Matanda,” which is now Tipakan. Nobody can tell where the names of Tangob and Tipakan were derived.


LIST OF ORIGINAL FAMILIES
TENIENTES FROM THE SPANISH TIME TO THE PRESENT
IMPORTANT EVENTS THAT TOOK PLACE
SPANISH TIME – During the Spanish occupation, the barrio was often visited by robbers or “tulisan,” as the people called them. There was oftentimes fighting between the “guardia civil” and the “tulisan.” Though the Spaniards ruled the country with abuses and severity, not even one of the people suffered any punishment from the Spaniards.

AMERICAN PERIOD – During this period, the American soldiers burned the houses of the people. The barrio people at their first sight of the American soldiers ran away. The soldiers ran after them. Upon reaching a river, they began firing, not knowing that there were women washing clothes in the river. This caused the death of one, Macaria Marasigan. The soldiers were after a man named Mariano Llavares. He was an officer of the “insurrectos” under the command of the late General Malvar.

WORLD WAR II – The people suffered very much during the Second World War. Nearly all the houses in the barrio were occupied by the evacuees from Lipa and from the different nearby barrios. They planted camotes, corn, bananas, and other crops that could be harvested within a short period. They did this for fear of [the] scarcity of food. Some of the people wore “sinamay” due to [a] lack of other kinds of cloth.

In the middle of February 1944, an incident happened. This incident gave too much trouble to the people. The Japanese soldiers coming from the barrio of San Benito raided Tipakan. The Japanese massacred a young lad of the barrio and some of the evacuees. The barrio people started for evacuation. They scattered to different places. Some of them evacuated to the barrios of Tiaong, Rosario, Taysan and Ibaan. During this time, the people encountered difficulties due to lack of food, clothing and some other things they needed.

AFTER WORLD WAR II – After the war, the people returned to the barrio not knowing what had happened to their homes and other properties. The houses were burned except a few of them and the barrio chapel. They at once built small houses of “habong” out of the remaining materials that were burned. Most of the people had no cattle to plow the field. They looked for jobs and nearly all of them were fortunate enough to have some kinds of work. Years passed and great changes were made. The people were able to secure the necessary things to be used in cultivating the land. Some of them were able to build better homes.


TRADITIONS, CUSTOMS, AND PRACTICES IN DOMESTIC AND SOCIAL LIFE
BIRTH – A mother after her delivery of the child is not permitted to stand until after four days from the date of delivery. She cannot eat bloody fish if the umbilical cord of the child is still fresh.

MARRIAGE – The parents of both parties talk about the marriage of their children. This is what we call “bulungan.” They arrange the date of marriage, the kind of feast or “handaan” if there is any, and the dowry on the part of the man. They select who will be the sponsors. The couple takes confession before they are married by the priest.

DEATH AND BURIAL – When a person dies, a “mamumuno” is called

to lead the prayer. The parents of the deceased receive money or “pakandila” from their friends, neighbors and relatives. Before a dead person is buried, he will be taken to the church. Another praying will be done. The priest will give benediction to the deceased before taking him to the cemetery for burial.

VISITS – Before a visitor enters the house of somebody, he says, “Magandang hapon,” “magandang umaga,” or “magandang gabi.” The one visited replies, “Gayon din naman,” “tuloy ka.” The visitor is told to sit. The person he visits offers him cigarette or food.

SUPERSTITIONS – If thunder comes from a different direction, they believe that it will rain for several days. During rainy season, when chickens wander at six o’clock in the afternoon, they are in the belief that a typhoon will occur.

MAGIC – There were two men of the barrio who could make wonderful things. Simeon Quinto was one of them. By putting saliva on an egg, the egg would stick to the lower part of his ear. The other man was Esteban Quinto. This man would whisper something through the hole of a bottle. Nobody could break it. But he could break the bottle by whispering and blowing through the hole.

POPULAR SONGS
PROVERBS AND SAYINGS – The following are the common proverbs:

Igalang muna ang iba.
(If you want to be respected,
Respect first the others.)

3. Pag may hirap, may ginhawa.

(If there is hardship, there is comfort.)

Kay sa babaeng salawahan sa pag-ibig
(I prefer an ugly girl rather than a girl who is not true in love.)

RIDDLES – The people have also riddles. They are:


Notes and references:
Transcribed from “History and Cultural Life of Barrio Tipakan” 1953, online at the National Library of the Philippines Digital Collections.
Next Post Previous Post
Historical Documents,Lipa