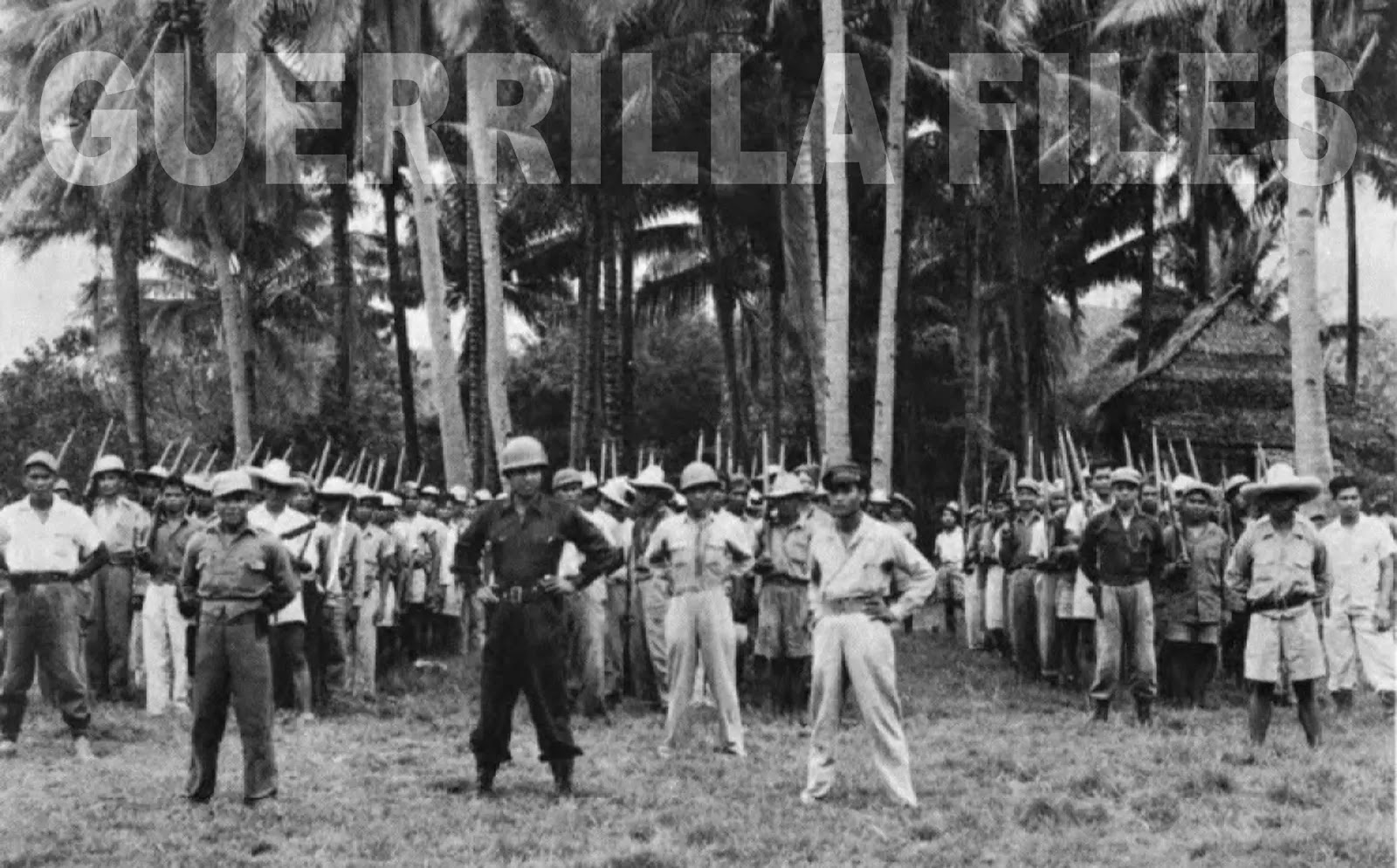 I. Organization
On the second day of June, 1942, a meeting was held in barrio Mayasang, municipality of Lemery, Batangas, for the purpose of formulating concrete plans concerning the establishment of a guerrilla unit in the western part of the province of Batangas. Among those present in the meeting were Messrs. Filomeno Gagalac, Antonio Catapat, and Simplicio Mercado. Sentiment in favor of the establishment of a guerrilla unit being unanimous, the “Gagalac Guerrilla Unit” was formally organized that date.

II. Objectives
In the meeting, the following objectives were agreed upon:

1. The securing of arms and ammunition for the unit;
2. To uphold the morale of the people and the maintenance of their spirit of loyalty to the government of the United States and refugee Commonwealth Government at Washington;
3. Suppression of pro-Japanese activities:
4. Maintenance of peace and order;
5. Protection of the civilians from bandits and lawless elements;
6. Sabotage works against the Japanese and the puppets;
7. Gathering of data and information of military value for transmittal to other units having contact with proper American military authorities; and
8. To conduct operations against the Japanese armed forces operating in the western part of Batangas province.

III. Expansion; Maj. Kramer, etc
The whole month of June was devote to matters of organizational details. New members were recruited and indoctrinated. Of great help to the organization were Lt. Robert S. Kramer, Lt. Eugene Georgenson and Pvt. Patrick Melody (members of the USAFFE who were taken care of by the unit). These three gentlemen welded the unit into a well-organized military organization.

IV. Campaign Against Banditry
Although organized primarily for resistance against the enemy, the Unit found it necessary in the interests of peace and order to divert part of its time and energy towards the suppression of banditry in the area. Thus, in the early part of July, 1942, the barrio of Bangbang was raided by bandits from the Cavite area. Money, livestock and other personal belongings were forcibly taken from the barrio folks. A patrol of the Unit chased said bandits resulting in the killing of one and the wounding of two of them. To prevent the recurrence of this affair, a system of patrol was evolved whereby the whole area was continually placed under surveillance. The patrols were instructed to ambush and waylay Japanese soldiers, Japanese Constabulary men, and bandits. In August 1942, a patrol of Japanese comprising some forty men was ambushed in barrio Mayasang. Five Jap soldiers were killed. No casualty was suffered by the Unit. During the latter part of September, a raiding party of bandits was intercepted by a mobile patrol of the Unit near the Batangas-Cavite border. After a short exchange of fire, the bandits retreated.


V. Japanese Penetration
By this time, the existence of the organization was already a matter of common knowledge. The Japanese military command launched an intensive campaign against the Unit. The Gagalac guerrilleros, hunted everywhere, were forced to go to the hills. The unit was forced to transfer from one barrio to another. As the intensity of the Japanese penetration increased, it was decided, for obvious reasons, that the three Americans should seek a comparatively safer place. It was decided that they should embark for Mindoro to contact Major Phillips, head of the first SWPA2 special mission in Mindoro. They were able to reach Abra de Ilog, Mindoro, and from there they proceeded to the hideout of Major Phillips. That was the last that was heard of them.

Close at the heels of the Japanese penetration was the implementing and coordinated move of the Japanese-sponsored Constabulary. They, too, joined the campaign. We had to move our headquarters successively to barrio Sandig, Gunamgunam, Banabahan, Pasubliin, Mayasang, Ticob, Duhat and Matipok, all in the Municipality of Talisay. However, in spite of said campaign conducted by numerically superior forces, the unit never relaxed in its activities along the lines of the agreed objectives. In an effort to demoralize the members of the Unit, the Japanese, with their Constabulary henchmen, terrorized the populace or several barrios in Lemery. In barrios Bangin and Corral-na-Munti, houses were burned, innocent civilians were tortured. These terroristic methods notwithstanding, the Unit carried on.

In August, 1943, a group of bandits robbed the barrio of Bilibinwang in the municipality of Lemery. Timely information being sent to the Unit, the said bandits were chased and driven away. In this encounter, two of the bandits were killed. The rest fled. Immediately after this encounter, a patrol of Japanese soldiers numbering about two hundred raided the barrio of Baungan. They captured all civilians they were able to lay hands on, burning houses and abusing women. In the ensuing engagement that followed, an unidentified number of the enemy was killed and wounded. Three members of the Unit were wounded. In retaliation, the Japanese killed several civilian hostages who they had captured.

Barely a week after, three separate groups of bandits came down from Tagaytay. The first group headed for Taal, while the second and third groups raided the barrios of Polo and Banyaga, respectively. All of them were rounded up and those who resisted were killed. Thus was put to an end the depredations of bandits within the sector of the Unit.

VII. Initial Encounters with Japs
During the latter part of January, 1945, news was received that the Japanese were burning houses and killing civilians in the barrio of Mayasang. In response, we sent a patrol to the aforementioned place. In the encounter that followed, three of the enemy were killed and two others were wounded. The Japanese retreated and the barrio was saved. The Unit commander in charge of the patrol deployed his forces in anticipation of a Japanese counterattack, but surprisingly, the Japanese did not return. It was learned later that that American forces had landed in Nasugbu.


VIII. Active Combat Action
The activities of the Unit after the landing of the American forces in Nasugbu is described in detail in a separate report, which is being incorporated as an integral part of this history.


SUMMARY
Several periods are, thus, embraced in the historical account of the Unit. The period of organization and expansion; the period of preservation of [the] peace and order thru [the] suppression of banditry; the period of Japanese penetration and campaign of persecution of the Organization; the period of sabotage activities; the period of initial encounter with the enemy; and, finally, the period of intense and continued combat action. Throughout all these stages and the history of the organization, untold sacrifices and indescribable hardships were undergone to protect the people and in engendering in them the spirit of hostility to the enemy. Families were abandoned, and for three years, the members of the Unit sought refuge in the hills. Wanting in clothing and food and deficient and arms, they carried on the mission of resistance against constant harassment and terrible odds, hoping that someday, the forces of freedom would return to relieve them of the major share in the burden they had thus far so heroically borne. In the history of the liberation, the unit can therefore rest content that it had its own humble share of blood, struggle, and privations.

This history cannot be complete without a word of appreciation for hundreds of patriotic civilians who, under great risks, gladly gave by any means what they could spare to support the members of this organization wherever they might have been driven by the pressure of enemy action.